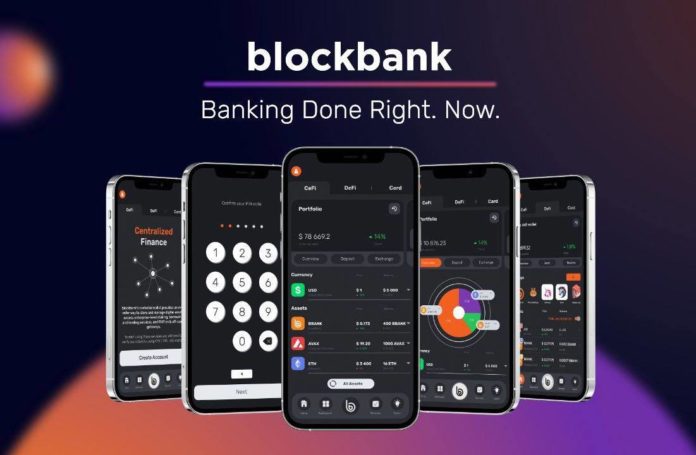 “Creating a neobanking super-app for crypto and digital assets has been blockbank’s ultimate vision since its inception. Throughout this past year, we have listened to our growing user base, acquired global licenses, and built one of the most technologically advanced pieces of software in this space,” said Anastasija Plotnikova, the CEO of blockbank.

Blockbank is available on the Apple and Google Play stores for download and provides the end user with a portal into all things banking, digital finance, and cryptocurrency. Having multiple back-ends with one front-end establishes a multi-faceted user-centric experience allowing each user to pick and choose how they want to participate not only in the application but with their own personal finances.

The app aims to give its users an unparalleled set of options. First, where they are fully KYC’d, and the assets are custodied within the application, users can stake, earn, and trade. Second, where users can be fully decentralized, they can participate directly in the DeFi space while self custodying their own assets. Third, they get access to a bank account number enabling them to send or receive traditional money. By the end of this year, a fourth component will be enabled – a working global crypto credit card allowing users to spend or withdraw cash from any ATM globally.

“The digital landscape is fragmented and complex, confronting investors and users with risk, security, and navigational challenges. Our vision was to defragment finance, and create a simple and easy-to-use platform where users can facilitate all their financial needs, no matter the vertical, in one super application. We can now proudly say we have accomplished our goal.” said Kelghe Dcruz, Co-Founder of blockbank.

Managing your finances, whether it be traditional or digital, shouldn’t be difficult, risky, or expensive. While traditional finance considers digital asset holders and users “high risk” and makes little to no effort to serve them compliantly and fairly, blockbank’s mission is to create an environment from the ground up to accommodate retail and institutional users with their desired needs.

“With our latest release, we are hitting a major technological milestone. We have worked hard to bring speed improvements to the features that blockbank users use the most. And together with an update, we are adding new security levels that are powered by Fireblocks. I’m sure our users will love it just as much as we loved developing it.” — Dmitrij Radin, Chief Technology Officer at blockbank.

The Avalanche network is now available

Users can easily access hundreds of AVAX tokens on the AVAX chain. This will allow users to conveniently participate in DeFi or Cefi services within the app, eliminating the need to use different applications for each network.

Since the launch of blockbank, the team has continued to work on speed, stability, and improvements so users won’t need to compromise speed and stability for the sake of low fees.

The improvements in the software enabled the increase in the speed of transactions drastically. Users can now enjoy faster deposits, withdrawals, and transactions. This next version introduces improved calculations of transit fees & swaps for all current and future protocols.

Neo Banking transactions will now happen faster and more efficiently, with the ability to deposit funds to users’ blockbank wallet using their card. In the near future users will have the ability to top up their cards directly with EUR, GBP, USD, and CAD.

Focus on security and convenience

Blockbank entered into a partnership with Fireblocks, a leading blockchain custody service provider for moving, storing, and securing digital assets. Fireblocks is a digital asset custody, transfer, and settlement platform.

Users can now access decentralized finance services easier and faster. When accessing the centralized section of the application, the KYC (Know Your Customer) process will take less than three minutes.

The purchased domain will replace a long, complicated wallet address with a single, easy-to-read domain of the buyer’s choice.

The blockbank team is happy to announce that together with the rollout of V3, the application will now be able to onboard North American clients.

“Being involved from the beginning and as the first investor in the project, I am beyond excited to see blockbank’s progress. I see such potential here to solve real-world problems – roadblocks that the other founders at blockbank and I have encountered with banks and traditional finance. It has been a long, arduous road, but we have now built the foundation to help our users mitigate these problems.” – Darren Franceschini, Co-Founder of blockbank.

The community remains the driving force behind our resilience, inspiring innovation and shaping future application updates. With the relentless support of the community, blockbank is on its way to becoming a true CeFi, DeFi & neobanking powerhouse, eliminating the complexity of digital asset management and unlocking a world of opportunity for its users.