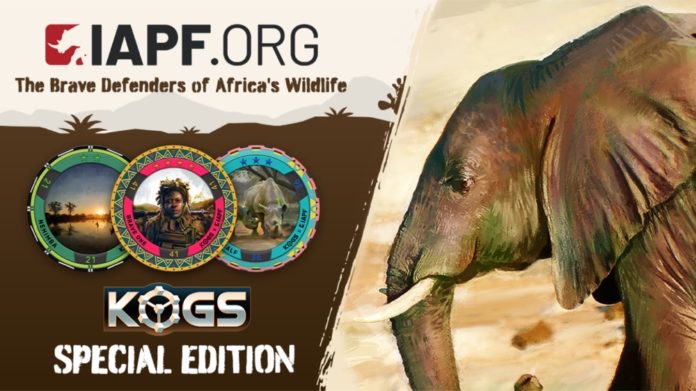 RFOX Games, a division of Metaverse Company RFOX, aims to bring a new level of play-to-earn to the gaming space. The flagship product and top-selling NFT (Non-Fungible Token), KOGs, updates the collectible milk caps concept of the ’90s and enhances it with the utility only blockchain can provide. KOGs are collectible, interoperable, and have proven to create additional revenue for collectors. KOGs: SLAM!, the first full-on chain mobile game, will showcase KOGs as a playable asset with various play-to-earn paths.

RFOX Games has partnered with International Anti-Poaching Foundation (IAPF) to create KOGs Special Edition: IAPF NFTs. These KOGs can be used as game pieces in KOGs: SLAM! and the utilities are continuously growing.

The IAPF has been protecting wildlife from illegal poachers and establishing self-sustaining communities in the wilderness since 2009. Through their Akashinga program, Africa’s first armed, plant-based, all-women anti-poaching unit, they bring conservation and communities together to protect themselves instead of IAPF doing it for them with education and employment opportunities in rural Africa.

The Akashinga program is a community-driven conservation program, empowering disadvantaged women to restore and manage a network of wilderness areas as an alternative economic model to trophy hunting. The program, established in Zimbabwe’s Lower Zambezi Valley in late 2017, has proven highly successful.

The KOGs Special Edition: IAPF release is a fund-raising campaign, where some proceeds go to IAPF to support different IAPF programs. This edition will feature the endangered species and breathtaking natural resources that the IAPF is helping preserve and the communities in the Akashinga program.

Fadzly Yusof, General Manager of RFOX Games, says of the partnership:
“We are honored to work with IAPF, an organization with a noble purpose. This collaboration with IAPF will bring our mission to the next level – utilizing emerging technologies to support the preservation of wildlife and communities in the wilderness.”

The founder of IAPF, Damien Mander, comments:
“We are excited to join forces with RFOX Games in bringing awareness to the NFT community about our mission to establish community-led conservation in the wilderness of Africa. The technology that RFOX Games provides will help our advocacy reach more people and potentially bring in more support.”

To learn more about this Fundraiser and NFT Drop, click here.

About RFOX Games
Founded in 2019, RFOX Games is a division of the Metaverse Company RFOX. It focuses on PLAY TO EARN to the mobile gaming space with the flagship product and top-selling NFT – KOGs, updates the collectible milk cap concept of the ’90s and enhances it with the utility only blockchain can provide. RFOX Games was founded with the vision of creating an ecosystem of interoperable tournament-based games that utilize emerging technologies.

About RFOX
RFOX is a metaverse company with a mission to be the global leader in immersive metaverse experiences focused on retail, media, gaming, and rewards, through the RFOX VALT metaverse. Since 2018, the company has built the RFOX ecosystem of products and solutions that include online games, whitelabel NFT platforms, crypto-financial products, digital media platforms, and more. Its main token is RFOX, the digital asset that fuels the RFOX metaverse ecosystem and its immersive technology.

About IAPF
The IAPF is a non-profit organization registered in Australia, predominately operating on the African continent. Founded in 2009, IAPF has been protecting the breeding program of black rhinos and other endangered animals from illegal poachers. The IAPF has trained and supported rangers who help save over 4 million acres of wilderness across the African continent, currently operating in southern and eastern Africa with various methodologies to preserve nature.

They’ve also empowered communities to protect themselves instead of doing it for them with education and employment opportunities in rural Africa through their Akashinga model, which combines conservation and communities together in their efforts.

First Look at the DreamsVerse

First Look at the DreamsVerse

MetaOne: GameFi is an untapped jewel in the making